Multi-calor is the most performing range of the multilayer pipes provided by Aquatechnik. Their structure is made up of five layers of tight materials which enhance the qualities of this metal-polymer duo.

The inner and outer layers are made from cross-linked polyethylene (PE-Xb), a polymer whose resistance to high temperatures and elevated hydrostatic pressures have been
established by its use in engineering sector installations for more than thirty years. As far as organoleptic and non-toxicity factors are concerned, this material is universally
recognized as one of the most suitable for the conveyance of drinking water.

The first stage of the production process is the extrusion of the inner layer of the pipe. The system, fed by cross-linkable polyethylene granules, additives, and catalysts melts the mixture and conveys it through a matrix to form the inner layer.

The molten material passes through a calibration system and cooling chamber in a vacuum where it takes on the required size and shape. In the next stage, a second extruder applies the first layer of adhesive to the surface of the pipe, which will allow the strong permanent bond between the plastic pipe and the aluminum foil, which will be applied later. The aluminum foil, which is supplied in reels, is accurately aligned by cutting the edges in such a way that the width exactly coincides with the circumference of the pipe on which it is to be wound.

Following alignment, the foil is gradually formed around the pipe using a multi-stage process that brings the two external edges into direct contact with each other whereupon TIG (Tungsten Inert Gas) butt welding takes place. Unlike other processes, including overlapping or overlapping with subsequent welding, this particular technology for molding aluminum pipes, besides guaranteeing uniformity of thickness over the entire circumference including the welding area ensures greater resistance to pressure, uniformity in terms of mechanical properties, greater
adhesion with the bonding layers and an oxygen barrier.

Immediately thereafter, the pipe is heated to activate the adhesive layer and generate the bond between the polyethylene and the aluminum.

See the full product dimensions and variations below: 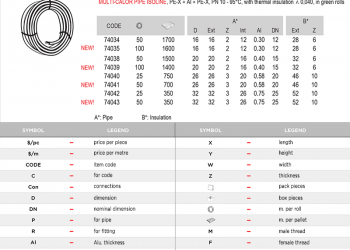